The National Agency for Food and Drug Administration and Control says Vice-President Yemi Osinbajo has ordered the agency to return to the ports immediately. 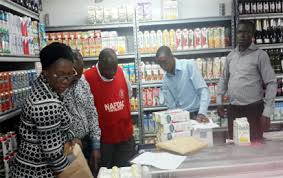 The order came less than three weeks after the NAFDAC Director-General, Prof. Mojisola Adeyeye, partly ascribed the drug abuse among youths to the unlawful importation of certain banned substances.

The agency said in a statement on Thursday that the directive to return to the ports was to effectively control the importation of unregulated products, falsified and substandard drugs, unwholesome foods, narcotic drugs and hazardous chemical substances and foods.

The statement read in part, “NAFDAC in collaboration with relevant Ministries, Departments and Agencies and with the active support of the Office of the National Security Adviser, the Presidential Enabling Business Environment Council, and the Ministry of Transport, has been returned to the seaports and borders to effectively control importation of unregulated products, falsified and substandard drugs, unwholesome foods, narcotic drugs and hazardous chemical substances and foods.

Adeyeye had said recently that thousands of Nigerians had died as a result of falsified and substandard medicines.

She had further stated that many were ill, most likely due to unwholesome foods, drugs and abuse of narcotics and controlled substances, such as codeine, tramadol and pentazocine.

“These are partly due to the exclusion of NAFDAC from our ports since 2011. The recent documentary on codeine abuse brought more attention to the issue,” she had said.

The NAFDAC boss promised to work with the Nigeria Customs Service, the Nigerian Shippers’ Council and other sister agencies in ensuring that foods, drugs, chemicals and other NAFDAC regulated products that pose danger to Nigerians were controlled at the point of entry.

Adeyeye said NAFDAC at the ports would ensure that dangerous drugs or substances of abuse, many times falsely shipped as building materials, electrical appliances and computer accessories would be intercepted at the point of entry.

One feared dead as militants, security operatives clash in Imo

A bloody confrontation played out yesterday in Owerri, between some members of the Niger Delta Avengers, NDA, from Ohaji/Egbema local council area of Imo State, and operatives of Imo Security Network, ISN, which claimed the […]

According to Press Released lately, Saudi Arabia has executed 47 “terrorists”, according to the interior ministry, including Shia cleric Nimr al-Nimr and al-Qaeda-affiliated Faris al-Zahrani. The ministry listed the names of all those it said […]

A former Commissioner for Education and House of Assembly member that represented Langtang South Constituency in Plateau State, Mr. Sargwak Wazhi has been murdered by suspected armed robbers on Thursday night. One his way back […]