Bola Tinubu, a national leader of the All Progressives Congress (APC), says a permanent discipline awaits Walter Onnoghen, former chief justice of Nigeria (CJN), if he is found guilty of the false declaration charges levelled against him. 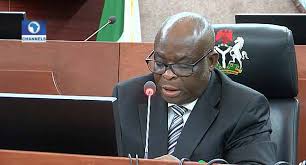 Tinubu said this while responding to the position of Atiku Abubakar, presidential candidate of the Peoples Democratic Party (PDP), on the suspension.

In a state of the nation address, Atiku accused President Muhammadu Buhari of clamping down on the judiciary.

But Tinubu said if the charges against Onnoghen turned out to be wrong or unproven, he would be automatically reinstated as the head of the judiciary.

“President Buhari conditionally suspended the CJN. By doing so, this allows for the case to move forward without the CCT or others fearing the CJN might use his position to unduly interfere with proceedings. If the CJN is exonerated, then he will return to his position. If not exonerated, then a more permanent discipline awaits him,” he said.

Tinubu accused Atiku of misleading the public that Buhari removed Onnoghen from office even though he knew that the president suspended him.

He wondered why Atiku was defending a “jurist who has enjoyed the sweet but hidden benefits of several million dollars of mystery money passing through his secret bank accounts even when discovered, these accounts held several hundred thousands of dollars in them”.

He said left to Atiku, Onnoghen should not be investigated despite the weighty allegations levelled against him.

The Dr. Sampson Uchechukwu Ogah Organisation has assured Abians not to loose hope because of the judgment of  the Appeal Court in Abuja, which  on Thursday, nullified the Certificate of Return issued to Dr. Sampson […]

According to reports, the Osun State Police Command has said a suspected explosive device in a car stereo, chopped-off four fingers of an Osogbo resident, who attempted to dismantle the stereo from a damaged car. […]

Femi Fani-Kayode (FFK) today paid a courtesy visit to the presiding Bishop of Living Faith Church (aka. Winners Chapel) in his Canaan Land home. “It was an honor to spend some time with one of […]