The National Drug Law Enforcement Agency, NDLEA, Edo state Command, has arrested a 60-year-old woman, Juliana Ogiefa, alongside 72 other suspects who specialise in cultivating and dealing in cannabis. 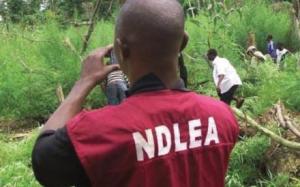 The NDLEA spokesperson, Mr. Mitchell Ofoyeju, in a statement, said the suspects included 60 males and 13 females, were apprehended in Edo state with 10,094.75kgs of cannabis.

Ofoyeju said the arrests were made between January and March 2016.

Describing how the cannabis hauls were seized, the statement said, “A cannabis laden Toyota Hilux and a J5 bus with cannabis disguised as pineapple shipment were impounded, while a warehouse located at the Okpuje forest, Owan West Local Government Area of Edo State, was detected and 2,590kgs of cannabis were seized.

“Four notorious drug dealers at Ekpoma, Auchi and Benin as well as five young farmers from Taraba and Plateau States are among those being investigated for cannabis cultivation and trafficking by narcotic undercover operatives in Benin City.

“The Edo State Command exhibit room is already filled to capacity with over 80,000kgs of cannabis,” the statement added.

Confirming the arrests and seizure, the state Commander of the NDLEA, Mr. Buba Wakawa, said a fake State Security Service, SSS identity card with the name, Daniel Okolo, was found in the Hilux van which was loaded with cannabis.

“In a forest at Owan West Local Government Area of state, where NDLEA officials seized 2,590kgs of cannabis, an official narrowly escaped a large trap that had been set on the ground by the cannabis dealers,” the Commander stated.

While noting that one of the arrested cannabis-dealing suspects included a 60-year-old woman, Juliana Ogiefa, who is on bail after her arrest for dealing in cocaine and heroin, Wakama said efforts were ongoing to sanitise the state of illicit drugs.

In the light of this, the NDLEA disclosed that it was pressing two separate charges against Ogiefa at the Federal High Court sitting in Benin with the hope that her illicit drug activities in the state would be permanently terminated.

Meanwhile, the Chairman of NDLEA, Muhammad Abdallah, has vowed to identify, arrest and prosecute cannabis cultivators.

He warned against the use of school age youths in cannabis plantations and called for the support of stakeholders at all levels in the anti-narcotics campaign.

“Edo State is a cannabis producing state. It is equally an important catchment area to us because it is strategically located in a way that drug dealers either come to buy or convey their illicit drugs across the state.

“This must come to an end,” the Chairman added.

Northern states governors yesterday said that the insurgency in North East region of the country, which has claimed thousands of lives, has gradually been halted. The governors, who commended President Muhammadu Buhari on the fight […]

It was gathered that the National Youth Service Corps (NYSC) has assured corps members passing out from the one year national service that loan facilities would still be available to them to start their businesses. […]

The police in Lagos has offered a five million Naira reward for information leading to the arrest of the gang which recently perpetrated a notorious robbery act on some banks in Ikorodu. Lagos state Police […]