The Federal Government has been told to rescind its decision to deploy troops to the Niger Delta communities in search of members of the Niger Delta Avengers (NDA) or any other militant groups operating in the region. 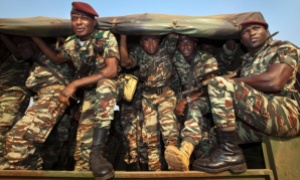 The group said instead of deploying troops to the region, the Federal Government should find a way of dialoguing with the militants, adding that this will be the best option.

Meanwhile, President Muhammadu Buhari has been commended for his efforts to kick-start the process of cleaning up the Ogoni environment by practically drawing up a road map for the implementation of the United Nations Environmental Programme (UNEP) Report.

Speaking in a telephone interview from Abuja on Monday, Mr. Udengs Eradiri, President of the Ijaw Youth Congress (IYC), said that the cleanup exercise has raised the hope of Niger Deltans because “Ogoni is a corridor to other communities in the Niger Delta.”

Eradiri said that any good thing that happens in Ogoni would trickle down positively to communities in the region, though it may take some years.

“We condemn the deployment of troops to the Niger Delta. As much as we condemn and will keep condemning the act of bombing pipelines and other oil facilities in the Niger Delta by militants, military option is not and can never be a solution to the problem.

“I think that we need dialogue at this point. We don’t know these boys, but we are calling on the Federal Government to reconsider the negative implication of sending troops to the region.

Things have never worked that way. You cannot use force to end a problem.

“I am pleading with the government and our dear president to have a rethink because two wrongs cannot make a right.

We condemn the actions of these boys. At the same time, we are calling on the government to withdraw the troops from the Niger Delta communities as this can only aggravate the problem,” the IYC president said.

Governor Nyesom Wike of Rivers State has said that he decided to take loans after he assumed office in order to pay backlog of salaries owed workers and complete some abandoned projects in the state. […]

Mrs Aisha Buhari arrives in US on weeklong visit

In a development with significant political implications, Nigeria’s First Lady Aisha Buhari on Wednesday evening arrived in Washington DC on a weeklong visit. She is billed to attend a number of events in the area. Sources […]

Five witnesses to testify against Dasuki

The Federal Government has proposed five witnesses to prove its case of illegal possession of firearms against a former National Security Adviser, Col. Sambo Dasuki (retd). The ex-NSA was arraigned before the Federal High Court […]