The United Nations has warned the Nigerian government not to return the displaced people living in different camps in and out the country to Borno and Yobe states for now, saying the North-east region was not safe yet for the return of the over 2.7 million Internally Displaced Persons (IDPs). 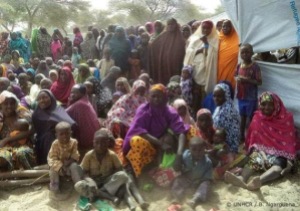 Speaking yesterday in Abuja at the Lake Chad Basin regional protection dialogue for the victims of Boko Haram insurgency, the United Nations High Commissioner for Refugees (UNHCR), revealed that the insurgency and its spillover into Cameroon, Niger and Chad has led to loss of thousands of lives and caused massive displacement of over 2.7 million people in the region.

UNHCR Regional Representative for West Africa and Regional Coordinator for the Nigeria Situation, Ms. Liz Ahua, who gave the warning, said about 60 per cent of the affected populations were children, disclosing that at least 20, 000 unaccompanied children had been displaced by the conflict.

She said: “We note that there are returns that are taking place even as we talk today, but I will simply want to underscore that the conditions are not fully ripe yet because we still have persistent threats from Boko Haram, presence of mines, unexploded Improvised devices as well as absence of some basic services. All of these put acute humanitarian and protection risks for the populations affected. We have visited these areas and we know precisely of what we are saying.

“In Nigeria alone, 3.5 million IDPs and host communities live in areas of Borno and Yobe states that are still largely inaccessible to humanitarian actors. We take note and rejoice on the successes achieved by the military operations that have brought back a number of areas in the northeastern Nigeria occupied by Boko Haram under government control as well as the capacity of the insurgence to engage militarily.

“However, these have not fully degraded the capacity for the harassment, the maiming and killing of the defenseless civilians. Consequently, conditions of living in the North-east are not yet fully conducive for the return of Nigerian refugees and IDPs particularly in Borno state.

“It is feared that another 50, 000 persons have been dislocated from their homes in a town in Niger following an attack that took place on that town on Friday, June 3.

Earlier, Permanent Secretary, Federal Ministry of Interior, Mr. Bassey Akpanyung, underscored the importance of the regional dialogue on protection of Boko Haram victims, given the progress Nigeria and other members of Lake Chad Basin Commission have made in the fight against the insurgency in the northeastern part of the country.

He said the significant degradation of the potency of the insurgent group by Multi National Joint Task Force came with attendant social and humanitarian challenges, particularly the emergence of refugee camps for displaced Nigerians in neighbouring countries as well as IDPs within Nigeria.

The three-day dialogue conference is expected to come up with recommendations on appropriate steps for the care of the displaced persons.

Just In: Buhari heads to France

President Muhammadu Buhari will depart Abuja on Friday for Paris, France, to participate in the first edition of the Paris Peace Forum which opens on Sunday and ends on Tuesday. Femi Adesina, special adviser to […]

Instagram has introduced a number of new features designed to help users feel safe online. The social network was recently said to have the most detrimental effect on young people’s mental health in a report […]