The Deputy President of the Senate, Senator Ike Ekweremadu, said on Tuesday that Nigeria must embrace restructuring as the surest solutions to its current economic challenges. 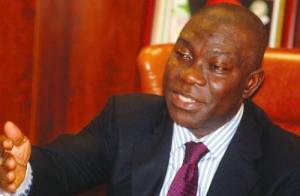 He argued that to succeed, the country must abandon its “feeding bottle federalism “ for true fiscal federalism.

The deputy Senate President also disagreed with the views expressed in certain quarters that all the country needed was good governance and not restructuring.

He spoke at the Second Annual Conference of the Young Parliamentarians Forum, which took place at the National Assembly in Abuja.

The theme was “Political /Economic Inclusion and Participation of Young People in Nigeria.”

He noted that the age-long culture of federating states running to the centre to ask for money monthly while resources wasted in their backyards would at best give temporary succour, but that the problem would continue.

Ekweremadu added, “I disagree with those who say that Nigeria does not necessarily need restructuring, but good governance that will eliminate corruption.

“The truth is that it is difficult to tame corruption where the federating units virtually run on free federal allocations that some people see as national cake, not their own sweat.

“Conversely, the people will be more vigilant and ready to hold their leaders accountable when the federating units begin to live largely on internally generated revenues and their sweat.

“However, restructuring should be on incremental basis to ease the country into a more prosperous future.”

He urged the nation’s youths to take active part in the affairs of their political parties.

Ekweremadu added, “We need to reinvigorate the youth arm of our political parties as in the days of the First Republic and pre-independence era when vibrant youth movements and arms of the political parties thrived and served as platforms for political apprenticeship for aspiring political leaders.

“Unfortunately, there is little we can do about meaningful youth economic inclusion and employment until we restructure our behemoth federalism.

“I still hold the view that this feeding bottle federalism, this act of robbing Peter to pay Paul, which we have gradually enthroned as state policy since the fall of the First Republic, remains cause of our economic quandary.”

A member of the House of Representatives and National Chairman, Young Parliamentarians Forum of Nigeria, Mr. Nnanna Igbokwe, called for more economic empowerment for youths.

He stated that this should precede the clamour to reduce the eligibility age of young people to participate in politics.

Meanwhile, the Speaker of the House, Mr. Yakubu Dogara, has stated that the country had little choice but to diversify its economy from dependence on oil revenue.

Dogara was speaking at the Chattered Institute of Taxation of Nigeria Abuja Tax Week on the Dilemma of Improving Tax Revenue in Tough Economic Times.

The Speaker told his audience how the House initiated a sectoral debate by ministers on the state of the economy to underscore the importance of diversifying the economy of the country.

He explained, “Midway into fiscal year 2016, the challenges of meeting yearning expectations is still as daunting as ever but the government is as resolute as it remains dedicated to bringing succour to the plight of the average Nigerian…

“To do this, the government deliberately tinkered with the federal budget in order to ensure that it delivers a 70:30 recurrent to capital spending per total budget expenditure in order to boost capital formation in the economy.

“We realise that capital project financing is vital to providing new infrastructure that would help build the badly needed capital formation for our economy to grow. We need to do even better in the 2017 budget and afterwards.”

On taxation, he said the news in most of the states was not cheering, except Lagos.”

“This means that Lagos is more able to serve its people 35.2 times with tax revenue over its Zamfara counterpart.”

According to reports, the Ogun State Police Command has arrested two herdsmen for allegedly killing another herdsman in an attempt to steal his cattle at the Itadodo area of Ofada in Obafemi-Owode Local Government Area […]

Photos of the interiors of the home of Africa’s richest man, Aliko Dangote, has hit the internet. The multi million dollar mansion situated in Abuja is worth $30Million (N5b) and it spells out luxury.  According […]