Economic and Financial Crimes Commission (EFCC), is putting paper and pen together to conclude arrangement invite former First Lady, Patience Jonathan, to explain her roles in the $31.4 million discovered in accounts of four companies, which has claimed ownership of the money in an affidavit before a Port Harcourt high court. 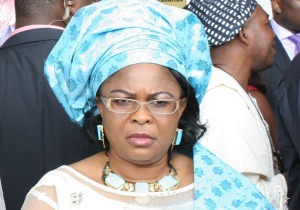 A competent source at the Commission said yesterday that the commission has decided “to go all out against the former first lady since she has fired the first shot”.

According to the source, the leadership of the commission was “taken aback by the open confession of the former First Lady and her temerity to sue us over this money”.

Mrs. Jonathan had dared the anti-graft agency to invite her to explain funds discovered in bank accounts that were linked to her and some of her associates, saying the money was meant for her medical bills.

“We now have no choice but launch a full scale investigation on this and other matters. We have traced a number of transactions and properties, like the hotel in Abuja and Bayelsa to her.

“The said $15 million is only a fraction of what we got from just a little investigation that we carried out. What we discovered were shocking and since she admitted operating those accounts, she has already indicted herself. We will definitely have to invite her to confront her with the facts.

“In the course of investigations we also uncovered several deals, some of them mind-boggling that are directly linked to her husband himself. We are yet to decide whether we are extending our hands to him. But it is something that we cannot ignore,” the source added.

In furthering investigations around alleged scandals involving Mrs. Jonathan, the commission has sought the permission of Department of State Security (DSS) to quiz some of its officers who had worked with the former first lady.

Blueprint learnt that names of some security personnel featured prominently among depositors into the accounts being investigated.

On Monday, solicitors of the former First Lady, First Law Associates, gave the EFCC to defreeze her accounts and tender a public apology to her.

Barrister Timipa Okponipere, senior partner in the chamber, in an open letter to EFCC chairman, Ibrahim Magu, warned the Commission to leave Mrs. Jonathan alone, else she will file an action at the African Commission on Human Rights.

Why there will be no peace in Nigeria – Orji Kalu

Orji Kalu, former Governor of Abia State, has warned that there will be no peace in the country until Nigerians imbibe justice, equity and fairness in all their endeavours. He noted that Nigeria cannot achieve […]

A Pentecostal Bishop, Rt. Rev. Seun Adeoye, has called on all Nigerians to double their prayers for the quick recovery of President Muhammadu Buhari. The Bishop said he sees trouble in Nigeria if Buhari dies. […]