Arsenal’s Alex Iwobi is a mixture of Jay-Jay Okocha and Edgar Davids, according to Gunners teammate Mesut Ozil. 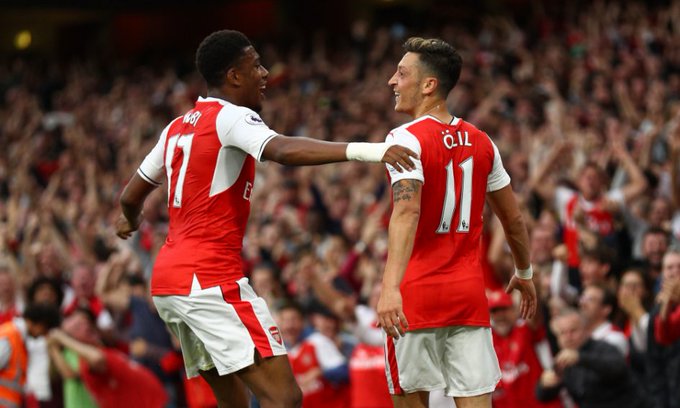 Iwobi, 20, has made six appearances this season and set up three goals but Germany international Ozil says he has the strength to complement his creativity too.

“He reminds me of his uncle, Jay-Jay Okocha,” Ozil said. “He was a player I loved watching.

“Alex reminds me of a mixture of him and Edgar Davids. He’s really strong on the ball, also defensively, but he’s good in front of goal too.

“He’s developing really well and if he continues the way he’s been playing for the whole season, he will enhance his game.

“The manager knows exactly how good he is and I wish him all the best.”

Paul Pogba has been spotted with the same mystery blonde he spent this summer with. As SunSport revealed, the Manchester United star has returned to the US to aid his recovery from a hamstring injury […]

Antonio Conte: I blames myself for Chelsea defeat

Antonio Conte blamed himself for Chelsea’s insipid defeat to Manchester United. The Blues were well below their best as they lost 2-0 at Old Trafford. Early goals at the start of each half from Marcus […]

Zlatan Ibrahimovic has been released by Manchester United for the time being after failing to make it onto the club’s official ‘retained’ list submitted to the Premier League today. The 35-year-old is being tipped to […]