A BTech student of an IT institution in Jharkhand, India was found dead,  stripped bare and burnt alive 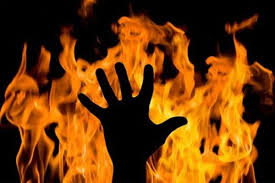 She was living at a rented house in Buty Basti with her sister who had gone to visit their parents in Hazaribagh district when her burnt body was found on Friday.

As the autopsy report to determine the cause of the Ranchi student’s death was awaited, police said they have formed a special investigating team (SIT) to probe the shocking incident.

The incident came to light on the day when the entire country was remembering the December 16, 2012 brutal rape and murder of a 23-year-old para-medical student, dubbed Nirbhaya, in a moving bus in Delhi.

Police said it was the fourth shocking incident of women being burnt alive after being raped or termed witch in Jharkhand in a week.

On December 14, an elderly woman and her husband in Simdega district were burnt to death on charges of practising black magic.

Lohar Singh, 70 and his wife Chotrai Devi, 62, were dragged out from their house by three men. They were thrashed first and later thrown over a heap of dry grass and set on fire.

Another woman was burnt alive on December 12 in Khuti district on charges of practising black magic.

Chidinma shares photos from her vacation in Zanzibar (PHOTOS)

Nigerian singer, Chidinma Ekile who is currently vacationing in Zanzibar, Tanzania, East Africa and being toured around by Nigerian Travel blogger, Nigerian Abroad shared these beautiful photos from her trip. She’s really having a good […]

The Senate, on Tuesday, has concluded plans to probe the allegation that an armoured Range Rover car allegedly worth N298m and seized by the Nigeria Customs Service belongs to the Senate President, Senator Bukola Saraki. […]