Former Minister of Aviation, Femi Fani-Kayode, has mocked President Muhammadu Buhari for crying,when he met with parents of the 110 schoolgirls that were recently abducted by Boko Haram terrorists in Dapchi, Yobe. 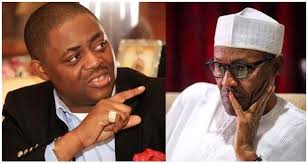 Fani-Kayode, writing on his Twitter page, called it “crocodile tears”.

“The crocodile always sheds tears as it chews its victims and eats its prey,” he wrote.

Buhari’s Senior Special Assistant on Media and Publicity, Garba Shehu, revealed how his principal got emotional in Dapchi, while speaking on Channels Television on Thursday.

Shehu claimed that when the president met with the parents of the missing girls at the scene of the abduction, he was moved to tears as the atmosphere was so emotive.

Buhari’s visit to Dapchi has stirred many reactions ranging from red carpet entrance to the hall of the meeting and his speech berating ex-president Goodluck Jonathan’s handling of the Chibok girls’ saga.

Wow!!! Three Men who look exactly alike meet each other aboard a plane

A man was shocked to stumble on a total stranger who looks exactly like him aboard his flight to Ireland. The 32-year-old man, Neil Douglas, was on a flight from London, England, to Galway, Ireland, […]

See the Value of the Naira Today at the Black Market

The Nigerian local currency, naira has remained stagnant in exchange for the U.S dollars at the parallel market likewise at the interbank rate. These are the currency exchange rates for today, October 20, 2016, powered […]

President Muhammadu Buhari on Tuesday hailed his predecessor, Goodluck Jonathan, for voluntarily conceding defeat at the 2015 general election, describing him as a true democrat. Buhari made the comment at the launch of Jonathan’s book […]