Katsina State Police Command has said it recovered 200 illegal arms from herdsmen and cattle rustlers in the state. 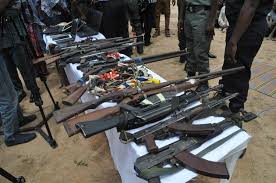 Mohammed Wakili, the Commissioner of Police, disclosed this at a news conference on Wednesday.

He said that the recoveries were sequel to the directives given by the Inspector-General of Police (IGP) to the commissioners of police and their supervising Assistant Inspectors General of Police to that effect.

He disclosed that most of the arms were recovered from herdsmen, cattle rustlers and other criminals.

He said that the police would continue to recover illegally acquired arms from the public.

“We are calling on those who have not returned their illegally acquired arms to do so before the expiration of the deadline.

“We will continue to fight these criminal elements with a renewed vigour,” Wakili assured.

NAF: Beyond Echoes Of An Erroneous Bombing

By Francis Okoye The bombing of a camp for internally displaced persons by a military aircraft in Rann, Kala-balge local government area of Borno State, on January 19, 2017, was greeted with unbelief and outbursts of […]

According to reports, the opposition Peoples Democratic Party on Monday said it was not surprised by the Federal Government’s controversial decision to reinstate Abdulrasheed Maina. The party also alleged that Maina had been paid N22m […]

Petrol Pump Price May Increase Due To Rise In Landing Cost

Experts say except the government acts fast, Nigerians may have no other choice than to buy petrol above N145 per litre. According to media reports, some marketers are saying it is no longer possible to sell […]