The Peoples Democratic Party, PDP, Kaduna State chapter, has observed that three years of the All Progressives Congress, APC led federal and Kaduna State governments have destroyed the institutions of democracy. 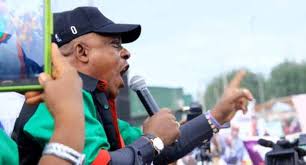 In a statement by the state PDP Publicity Secretary, Abraham Alberah Catoh, on the state of the nation, PDP described the 2018 Democracy Day Celebration as a day of sober reflection with nothing to celebrate.

The party explained, “In retrospect, only 3 years down the line the tenets of our democracy is fast eroding. The All Progressive Congress(APC)-led federal and state governments have been destroying the major Institutions of our democratic state.

“Arbitrary arrests of innocent law abiding Nigerians, attacks on journalists, media trials of perceived enemies and “corrupt politicians” from the opposition parties or dissenting voices, unconstitutional demolition of properties belonging to Nigerians and opposing political actors and demolition of markets.”

The party noted that the APC was trying so hard to destroy the separation of powers between the National Assembly and the Executive.

The party lamented, “For 3 years that the APC took over power, it has failed Nigerians that voted for “change” completely at all levels. Three (3) years is enough time to assess any serious government. The APC has refused to fulfill its campaign promises and have continued in their blame game attitude, unabated because of their ineptitude.

“In Kaduna State, there is no single project initiated and completed by governor Nasiru El-Rufai, even with the quantum of monies running into trillions of Naira from the Federation Account, Paris Club refund, bail outs, loans and grants, and proceeds from the sale of government houses and properties.

“The spate of uncompleted projects in Kaduna State is an eye sore with no hope of completion in sight.

“In furtherance of the El-Rufai anti-people policies, over 50,000 civil servants were sacked without recourse to laid down rules even with their campaign promise of providing jobs to our teeming youths.

“The APC also promised to revive the ailing textiles industries, but as usual with the El-Rufai and APC administration, that is synonymous with lies and propaganda, nothing has changed rather the people are worst off.”

The PDP described the APC as the worst thing that has happened to our 19-year democracy.

It said, “A party that prides itself as a change platform that won elections through a transparent balloting using the Card Reader is afraid of using same process to conduct local government councils election.
“They could not allow a level playing field for all parties to participate fully. The election was an embarrassment to the electoral process; the APC missed an opportunity of writing its name in gold, just like the PDP did in 2015 general elections. With all their claims of fanthom “achievements”, the people were ready to vote against them.

“In places where elections took place, the people voted against them. While the APC desperate politicians stole away Voting materials that is, Electronic Voting Machines (EVMs), results sheets et al, to hotels and some other pasts of the state because they were scared of losing the elections. What a shame!

“The spate of wanton killings by herdsmen and unknown gunmen and kidnappings is unprecedented, people are maimed and killed without government intervention, but even with the glaring lack of government’s delibrate intervention in protecting the citizens, Governor El-Rufai announced to the world that “the security situation in Nigeria is only exaggerated by the media”.

”No wonder, the government has allowed the reckless killings and kidnappings in Birnin Gwari, Giwa and Southern Kaduna to go on even with the payment of “compensation” to these terrorists by the governor,” PDP wondered.

Mismanagement of resources has been the main problem confronting Nigeria – Obasanjo

Former President, Chief Olusegun Obasanjo, lamented yesterday that mismanagement of resources has been the main problem confronting Nigeria. The former president, who spoke at the 2015 annual summit and his 78the birthday celebration held […]

Wema Bank Plc has announced the appointment of Babatunde Oladele Kasali as a Non-Executive Director, following the approval of the Central Bank of Nigeria. Kasali is a consummate professional with expertise in Audit, Risk Management, […]