The Joint Health Sector Union, JOHESU, on Thursday called off its 43-day-old strike. 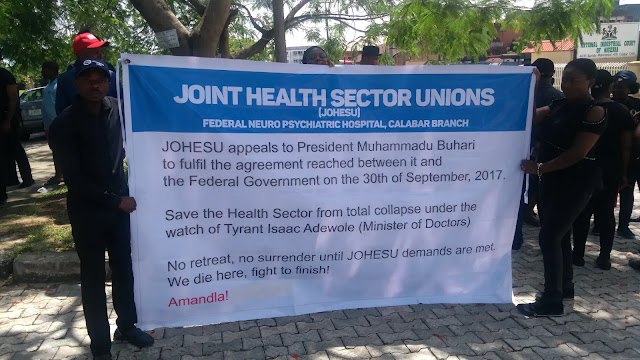 It dircted its members to resume work on Friday.

The body also slamed the Federal Government for failing to meet its demands.

The directive was contained in a communiqué issued at the end of the National Executive Council meeting of JOHESU and Assembly of Healthcare Professional Associations in Abuja.

The communiqué read in part, “The various gains from the meetings with the Senate President, Bukola Saraki, were presented to the NEC of JOHESU.

“After exhaustive deliberations and discussions, the NEC in session approved that the six-week old strike be suspended this day Thursday, May 31, 2018 because of the sympathy the unions have for the suffering Nigerian masses and also to pave way for further negotiations to continue on Monday, June 4, 2018.”

Garba Shehu, senior special assistant to the president on media and publicity, says the administration of Barack Obama, former president of the United States, failed to give Nigeria the required support in the fight against […]

The Commissioner for Environment in Borno state, Waziri Imam, has died. He died this morning following a brief illness at the University of Maiduguri Teaching Hospital. He will be buried today according to Islamic laws. […]