Hope that the planned industrial action billed to begin tomorrow would be shelved has been dimmed as the Organised Labour, yesterday, denied receiving any restraining court order. 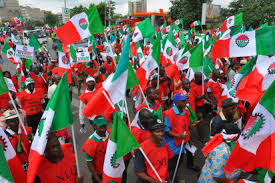 Organised Labour had threatened to commence an indefinite strike to press for the increase in the national minimum wage from the current N18,000.

As they shunned a reconciliatory meeting with the Federal Government, the labour leaders warned that only positive response from government at today’s tripartite committee meeting could forestall a showdown.

The meeting held behind closed doors at the Office of the Secretary to the Government of the Federation, was attended by Boss Mustapha, Minister of Labour and Employment, Chris Ngige; Minister of Finance, Zainab Ahmed, and some permanent secretaries.

Mustapha, who spoke before the meeting went into closed session, indicated that the tripartite committee on national minimum wage set up by the Federal Government would be concluding works on its report today.

He said the Federal Government was waiting for the report so that it could commence processes leading to the enactment of law on the new minimum wage.

The SGF explained that the report would still go through the National Economic Council and the Council of State before an Executive Bill would be sent to the National Assembly on the issue.

He added that the only outstanding issues left for the committee was to harmonize the 15th chapter of the report, harmonise figures and submit report to the President.

Deputy President of the Trade Union Congress (TUC), Sunday Salako, in a telephone interview, said members of the Organised Labour considered the meeting as unnecessary since there would be a meeting of the Tripartite Committee on Minimum Wage which would have all the representatives in attendance.

“Though we are not preempting the government, as far as we are concerned, we cannot revisit the issue. We believe the meeting is for us to come and sign the report. Some of us, even from the Organised Private Sector and government, have signed because we’ve all thought it’s a mission accomplished.”

He maintained that no court injunction was served on the unions restraining them from embarking on the proposed strike from November 6.

“We don’t have a copy of any court injunction and we cannot speculate neither can we acknowledge what we do not have,” he said.

Justice Sanusi Kado, sitting in Abuja had last Friday restrained the organised labour from going ahead with its planned strike pending the determination of the suit brought by the Federal government.

His decision followed an ex parte application moved by the Solicitor-General of the Federation and Permanent Secretary, Federal Ministry of Justice, Mr. Dayo Apata.

The suit with No: NICN/ ABJ/287/2018, was filed on November 1 by the Federal Government through the office of the Attorney-General of the Federation, Mr. Abubakar Malami, as the 1st and 2nd claimants respectively.

After listening to Apata, the court held the planned strike would lead to huge economic loss to both public and private institutions and could jeopardise the health of many Nigerians who would not be able to access health facilities during the period.

Apart from the NLC and the TUC, the NGF is also joined as a defendant in the suit.

Justice Kado adjourned the matter till November 8 for the hearing of the motion on notice seeking the interlocutory injunction to stop the strike.

The judge ordered that the court order and other papers be filed on all the defendants.

The last meeting of the tripartite negotiation committee had ended in a deadlock after the Federal Government insisted that it could only afford to pay N25,000, while the governors under the aegis of the Nigerian Governors’ Forum held on to N22,500 and the labour N30,000.

Recall that the President of the Nigeria Labour Congress (NLC), Ayuba Wabba, who briefed the media at the end of the joint meeting involving the three labour centres, NLC, Trade Union Congress (TUC) and the United Labour Congress (ULC), on Friday, had also denied knowledge of the court injunction.

“We are not aware of any court injunction anywhere, and we can’t go into any speculation. Our judicial process has gone beyond ‘Jankara injunction.’ As we are now, no NIC notification has been served to us.”

He stated that the proposed strike would be a total shutdown of both the public and private sector of the economy.

“The only way government can stop the strike is to allow the chairman of the of the Minimum Wage Committee to submit the report which has the N30,000 consensus figure, anything short of it, we will commence indefinite strike from November 6.

“The N30,000 was not our demand, but a compromise figure which acceptance was bore out of patriotism.”

to clamp down on labour through the invocation of “No work no pay policy.

Already, the National Union of Local Government Employees (NULGE) has directed its members to commence mobilisation for the indefinite nationwide strike.

Meanwhile, frontline lawyer Chief Mike Ahamba (SAN) has called on labour to obey the order of the National Industrial Court restraining them from embarking on its indefinite strike.

He said Labour could approach the court to set aside the order if it was not comfortable with it.

According to him, it is trite law “a court order must be obeyed even if such Order is perverse, until such a time that the Order is set aside by a competent court.

“Those that procured the order must have convinced the court into granting it. So as it stands now, labour cannot proceed on the planned strike until the order is set aside, anything short of that would amount to contempt of court.

“The issue of minimum wage has been on for long and it should be resolved before the general elections.”

Kano State Chapter of NLC has directed workers in the state to embarked on indefinite strike.

The chairman, Ado Minjibiri said they would prevent flight operations at the Malam Aminu Kano International Airport (MAKIA) as workers there have been mobilized to join the strike.

He said they would only give room for skeletal services in some critical sectors.

According to the state Publicity Secretary, “even though some of the governor’s disagreed on the N30,000 minimum wage, I believe Enugu governor will pay because he has workers’ interest at heart and he believes that the only way to motivate workers for effective service is through better wage. So, I believe Governor Ugwuanyi will not pay anything less than N30,000 because he will not want the workers who voted him into power to suffer, he will not disappoint them so he must fulfill his promise of meeting their needs,” he said.

He said the law on industrial matters were deliberately in the Exclusive legislative list, saying otherwise we would have people who would pay starvation wages or not pay salaries at all.

The governorship candidate of the Social Democratic Party, SDP, in the just concluded election in Osun State, Senator Iyiola Omisore, has finally revealed why he decided not to support Senator Ademola Adeleke of the Peoples […]

The Central Bank of Nigeria (CBN), yesterday blamed commercial banks in the country for sabotaging its efforts at replacing mutilated notes with new ones. Mr. Isaac Okorafor, Acting Director, Communications Department of CBN, made the […]

The Lagos State Government on Tuesday debunked rumours of increase in the cost of processing motor vehicle particulars and application for number plates, saying the rates remain the same across the State. A statement by […]