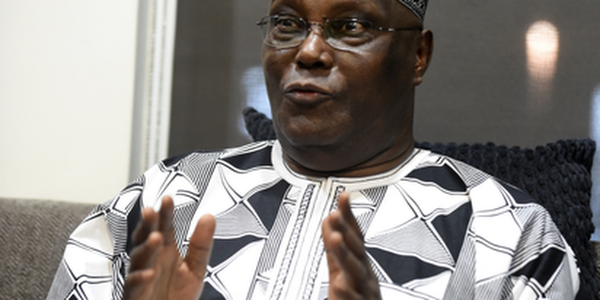 Adesina said this in an article where he criticised the PDP presidential candidate for attacking provisions of the 2019 budget.

He referred to a number of issues Atiku commented on including crude oil prices and foreign reserve earnings, under-recovery paid by the Nigerian National Petroleum Corporation (NNPC), and domestic resource mobilisation.

Adesina said Atiku had no “workable solutions” on the issues raised but only played to the gallery by criticising efforts by the Buhari-led administration to solve them.

“Atiku describes the underlying assumptions of the budget as generous, wild and untenable but does not propose alternative assumptions that would have been more appropriate,” he wrote.

“Atiku attributes the sustained accretion to foreign reserves to “increases in international prices of Brent Crude and foreign borrowing”. But he conveniently forgets that under the immediate past federal administration oil prices were at an all-time high with substantial growth in foreign borrowings, and yet foreign reserves nose-dived from a peak of $62 billion to as low as $24 billion.

“His repeated reference to the price of Brent Crude throughout his statement may be indicative of his lack of knowledge that Nigeria’s Bonny Light Crude trades at a premium of at least $2 per barrel over the price of Brent; just as his reference to Nigeria’s OPEC quota may also suggest that he does not know that Condensates do not count in measuring compliance with the quota.

“The PDP Presidential candidate faults the provision of N305 billion for NNPC’s cost under-recovery on Premium Motor Spirit (PMS) but does not say exactly what he would do about PMS pricing. If however we are to go by an earlier statement from his campaign organisation, which promised to reduce the price of petrol to N87, then we can expect a much higher subsidy provision from an Atiku government; because he is not going to perform magic to get the refineries working at peak capacity immediately.

“To further show Atiku’s lack of knowledge about basic issues in the petroleum market, he contradicts himself in his quest to make a non-existent point. He complains about the benchmark price of $60 per barrel used for crude oil exports in the budget and tries hard to show understanding of the dynamics of the global oil market by referring to US shale oil production and pressures on the Saudi regime. Yet Atiku expects that OPEC quotas will come into force, in which case the price of crude oil may rise in international markets. What is obvious is the fact that low oil prices impact negatively on shale oil production.

“It is therefore obvious that Atiku’s statement on the budget was a poor attempt at playing to the gallery… high on populist rhetoric but low on any real solutions to the identified challenges.”

Wife to the Nigerian President, Mrs Aisha Buhari, today paid a condolence visit to Vice President’s wife, Mrs Dolapo Osinbajo over the death of her grandmother HID Awolowo, who died earlier in the day at age 99. […]

It was gathered that Egyptian authorities have seized share certificates belonging to former football star Mohamed Aboutrika after allegations that a company he founded funded the blacklisted Muslim Brotherhood, judicial officials said. The move against […]