The People’s Democratic Party (PDP) presidential candidate, Alhaji Atiku Abubakar, has reassured Nigerians that he will structure the country if elected the president on February 16. 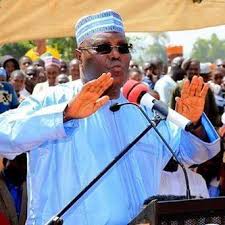 Atiku who made the assurance at Basilica of Holy Trinity field Onitsha, Anambra State, while addressing an unprecedented crowd who waited from morning till about 5.30pm when he stormed the venue in a motorcade.

He was accompanied to the place by his wife Jennifer, who hails from Onitsha; vice presidential candidate, Mr. Peter Obi; the National Chairman of the party, Chief Uche Secondus and the Director of his campaign organisation and Senate President, Dr. Bukola Saraki among other party stalwarts.

Atiku also promised to reconstruct all the federal roads in the South East geopolitical zone because according to him, his vice presidential candidate is from the zone and has been known for infrastructural development.

He told his supporters that he had not yet come for the campaign but visited as their son-in-law and appealed to them vote for him and other PDP candidates for Senate, House of Reps and House of Assembly.

He said: “I’m Mr. Restructuring and assure you that if elected, I will restructure the country. I will reconstruct all the bad federal roads in the South East through your son Mr. Peter Obi. Come February 16, Buhari must go; he must go and I will be the next president by the grace of God. Support me, support your daughter my wife and support your son who is my vice.”

Chief Secondus moved the motion declaring Atiku as the next president with the support of Nigerians.

He, however, warned INEC to desist from any attempt to rig the election, saying that doing so will be for the betterment of the country.

A coalition of women group under the aegis of the Nigerian Women for Peaceful Coexistence and Unity has said that the unity of Nigeria is non-negotiable. The group’s leaders, former senator, Florence Ita-Giwa; former deputy […]

The National Youth Council of Nigeria (NYCN) on Wednesday in Abuja held a special prayer session to seek God’s intercession for President Muhammadu Buhari, Nigeria, Africa and the World. The council offered special prayers for […]

Leader of the Indigenous People of Biafra and founder of Radio Biafra, Mr. Nnamdi Kanu, has filed a fresh application for bail before Justice James Tsoho of the Federal High Court in Abuja. [pro_ad_display_adzone id=”60438″] […]