Imo State Governor, Rochas Okorocha, on Tuesday described politicians from the state as local champions who could betray their leaders because of peanuts. 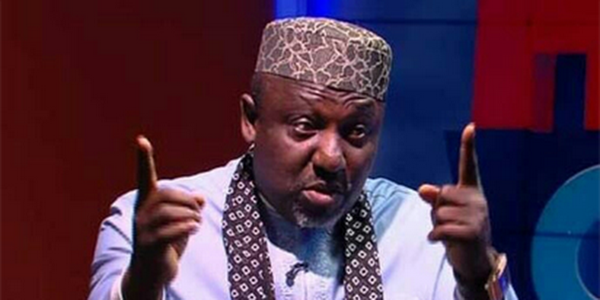 The governor spoke at a press conference inside the Government House, Owerri, the state capital.

He noted that politicians from the state were not like those from South West and North who respect their leaders.

“Imo politicians are local champions; you can quote me. They can collect peanuts in order to destroy their own. But I respect the Hausa and Yoruba politicians, they respect their leaders,” the governor said.

He said if elected a senator during the February 16 elections, he would attract projects to the state unlike the past and current occupants of the seat who he alleged did not attract “even a bungalow” to the state.

“I am going to the Senate for two things: first reason is to represent Imo State and Igboland.

“The second reason is to make sure that what is due to us get to us.I want to be politically relevant after I leave office as governor,” he said.

The governor also urged the people of the state to vote for his son-in-law, Uche Nwosu, who is the governorship candidate of the Action Alliance in the state.

He expressed the confidence that Nwosu would continue from where would will stop and develop the state further.

He expressed optimism that with him as a senator and Nwosu as governor, the state would witness rapid development.

Okorocha took a swipe at his deputy, Eze Madumere, for allegedly betraying him.

He said, “Look at Madumere. Today, he would have been a senator, but he betrayed me. The Hope Uzodinma he is supporting today, where is he from? Is he not from the same Orlu zone where Uche Nwosu comes from?

“Have you been to Madumere’s house? Is it not bigger than this Government House? Look at Emma Ibediro that I fought hard so that he can become the APC’s National Organising Secretary, today he has betrayed me.

“I made Osita Izunaso APC’s first National Organising Secretary. From being a Permanent Secretary, I made George Eche Accountant-General and later Secretary to the State Government. It is in their blood to betray people.”

Tinubu vows never to leave APC, says he laboured for it

In a series of tweets, former Lagos state governor and National Leader of APC, Bola Tinubu, said APC is a party he labored with some other party members to build and will not be abandoning […]

I am the most popular Governor in Nigeria – Rochas Okorocha

Benue State Chapter of the All Progressives Congress (APC) has announced the sale of nomination forms for aspirants vying for chairmanship and councillorship positions in the forthcoming Local Government Elections. The State Chairman of the […]